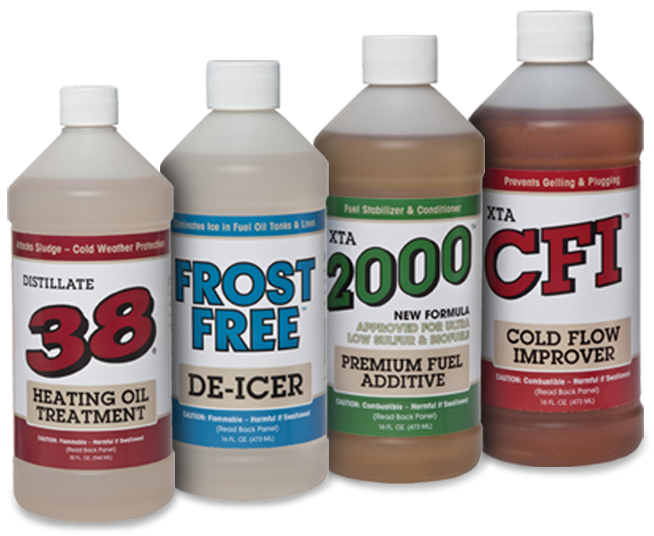 Cold weather has always been the bane of home heating oil that is stored outside in either aboveground or underground tanks. The typical problem is blockage of the oil supply due to gelling, wax accumulation on filters and strainers, or ice forming in the supply line or filter. While each of these problems can be avoided by the proper application of specialty additives, it is important to distinguish between oil problems and water problems. Each of these is caused by cold temperatures but they are separate issues which require different preventative treatments.

The preventative treatment for cold weather problems is to treat the oil with a cold flow improver before the cold weather arrives. Also called pour point depressants, these additives modify the wax crystal structure and lower the temperature flow range of the oil, usually by 20°F or more. These products will not melt wax that has already formed or liquefy gelled fuel. Once the oil begins to wax or gel only heat can return the oil to its original condition. Since the minimum temperature specification for the oil changes each month and the time between deliveries may exceed 4 weeks, the safest policy is to treat outside tanks with each delivery. It’s cheap insurance against an expensive no heat emergency.

Frozen condensation water, often called icing, is the second cold weather problem. Since water separates from the oil, icing requires an additive that treats the water rather than the oil. Icing is easy to understand because water always freezes at 32°F. Condensation from the air inside the tank forms on exposed surfaces throughout the year. Since water is heavier than oil, the water ends up beneath the oil at the bottom of the tank and can migrate to the filter and oil supply line. Even with modest amounts of condensation, outside tanks can be vulnerable to ice blockages at temperatures of 32°F or lower.

When used proactively, a good deicer additive will remove normal amounts of condensed water and serve as an anti-freeze for larger quantities of water. Just as with cold flow treatment, preventative anti icing treatment in advance of cold weather is the safest policy. Some deicer products are able to thaw frozen lines and filters. But why wait for an emergency?

For tanks exposed to cold temperatures, proactive treatment with each delivery throughout the heating season is the safest strategy. Additives won’t help once the oil is gelled. Some additives can thaw ice in lines or filters, but why risk that problem? A no heat emergency in cold weather is inconvenient and a service call can be expensive. In a worst case scenario, your house may be at risk from frozen pipes.

So, regular additive treatment of outside tanks makes good sense. Consider it an inexpensive insurance plan.

Bioheat® is a blend of biodiesel and Ultra Low Sulfur Heating Oil (ULSHO). Biodiesel is produced from a variety of renewable organic sources such as plant oils, animal fats, recycled grease and even algae. Biodiesel is currently blended with ULSHO at rates between 2 and 20 percent of volume. The pour point for biodiesel varies depending on its source and is invariably higher than the pour point for ULSHO. Suppliers use additives to bring the blended Bioheat® product into compliance with the ASTM minimum temperature requirement. That would imply that the issues should be unchanged for outside tanks.

Time will tell how the biodiesel component will affect cold weather performance of the Bioheat® blend in everyday use. But, in the meantime, it seems prudent to follow the guidelines above for proactive treatment for tanks exposed to cold weather.